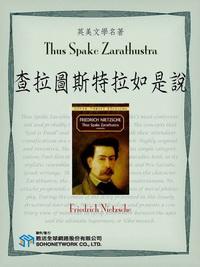 Thus Spake Zarathustra is certainly Nietzsche's most controversial and probably his most important work. The concepts that 'God is Dead' and 'Eternal Recurrence' with their attendant ramifications are major features of this work. Highly original and inventive, Thus Spake Zarathustra defies simple categorization. Part literature, part philosophy, it parodies both, in its stylistic resemblance to the New Testament and Pre-Socratic Greek writings. Through a fictionalized version the character Zarathustra, the legendary founder of Zoroasterianism, Nietzsche propounds a new and different version of moral philosophy. During the course of the story presented in this loosely structured narrative, Nietzsche develops and presents a contrary view of mankind: as lying somewhere between the apes and the ultimate Superman, or Ubermensch.

The Education of Henry Adams

The Travels of True Godliness = 敬虔腳蹤行